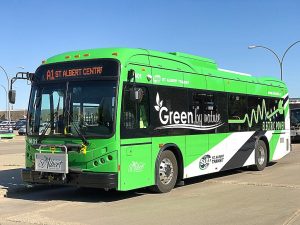 The California Air Resources Board has adopted a new rule that mandates that the public bus system will move to an all-electric fleet. Mass transit agencies in the state will only be allowed to buy fully electric buses starting in 2029. The agency expects municipal bus fleets to be fully electric by 2040.

Reaching this goal would require the state to acquire more than 14,000 new zero-emission buses. About 150 of the state’s current fleet of 12,000 buses are electric buses. Under the new plan, a quarter of the state’s transit agencies new buses must be electric in 2023, rising to half of all new buses by 2026.

California’s new Innovative Clean Transit rule comes after several years of air resources board’s work with industry and public-health groups. The agency estimates that the rule would reduce tailpipe emissions by 19 million metric tons by 2050, which is about the equivalent of taking four million cars off the road. These types of emissions have been linked to the formation of smog, which in turn has been linked to asthma and heart disease, among other things.

The 16 members of the air resources board voted unanimously to adopt the measure. Agency chairwoman Mary D. Nichols said in a statement, “A zero-emission public bus fleet means cleaner air for all of us. It dramatically reduces tailpipe pollution from buses in low-income communities and provides multiple benefits, especially for transit-dependent riders.”

California, which has the unique authority to write its own clean air rules under federal law, has long been a leader in environmental protection. It is the first state to mandate that all buses on public transit routes be electric and was the first state to mandate new homes be retrofitted with solar panels with a vote earlier this year. The state also became the first to commit to transitioning to a 100 percent renewable energy electric grid by 2045 with a bill signed in September.