Callon Petroleum (NYSE:CPE) last posted its quarterly earnings data on Monday, November 4th. The oil and natural gas company reported $0.19 earnings per share for the quarter, topping the Thomson Reuters’ consensus estimate of $0.18 by $0.01. The company had revenue of $155.38 million during the quarter, compared to analyst estimates of $152.61 million. Callon Petroleum had a net margin of 38.86% and a return on equity of 7.48%. The company’s revenue was down 3.6% on a year-over-year basis. During the same quarter last year, the business posted $0.21 earnings per share. As a group, equities research analysts predict that Callon Petroleum will post 0.74 earnings per share for the current fiscal year.

Callon Petroleum Company, an independent oil and natural gas company, focuses on the acquisition, development, exploration, and exploitation of unconventional onshore oil and natural gas reserves in the Permian Basin in West Texas and southeastern New Mexico. As of December 31, 2018, its estimated net proved reserves totaled 238.5 million barrel of oil equivalent, including 180.1 MMBbls of oil and 350.5 Bcf of natural gas.

Read More: How is the LIBOR rate calculated? 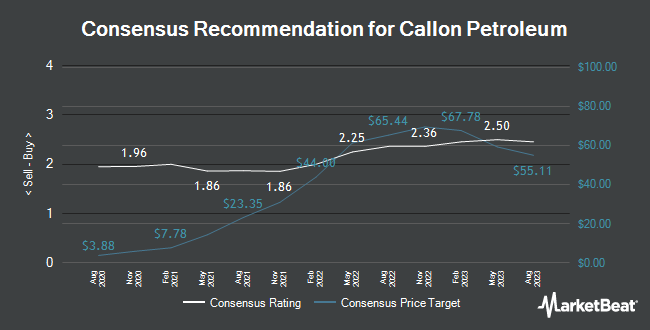 Complete the form below to receive the latest headlines and analysts' recommendations for Callon Petroleum with our free daily email newsletter: