Equities analysts predict that Amerisafe, Inc. (NASDAQ:AMSF) will announce $80.34 million in sales for the current fiscal quarter, according to Zacks. Two analysts have made estimates for Amerisafe’s earnings, with estimates ranging from $77.67 million to $83.00 million. Amerisafe posted sales of $91.19 million in the same quarter last year, which would indicate a negative year-over-year growth rate of 11.9%. The firm is expected to report its next quarterly earnings report after the market closes on Thursday, July 30th.

Amerisafe (NASDAQ:AMSF) last released its quarterly earnings results on Wednesday, April 29th. The insurance provider reported $0.88 earnings per share for the quarter, topping analysts’ consensus estimates of $0.79 by $0.09. Amerisafe had a net margin of 23.73% and a return on equity of 19.78%. The business had revenue of $86.94 million during the quarter, compared to the consensus estimate of $86.27 million.

The firm also recently disclosed a quarterly dividend, which was paid on Friday, June 26th. Shareholders of record on Friday, June 12th were issued a $0.27 dividend. This represents a $1.08 dividend on an annualized basis and a yield of 1.80%. The ex-dividend date was Thursday, June 11th. Amerisafe’s dividend payout ratio is presently 23.48%.

In other Amerisafe news, EVP Vincent J. Gagliano sold 2,408 shares of Amerisafe stock in a transaction on Tuesday, May 26th. The shares were sold at an average price of $63.42, for a total value of $152,715.36. Following the completion of the transaction, the executive vice president now owns 20,049 shares of the company’s stock, valued at $1,271,507.58. The transaction was disclosed in a filing with the SEC, which is accessible through the SEC website. Insiders own 1.70% of the company’s stock. 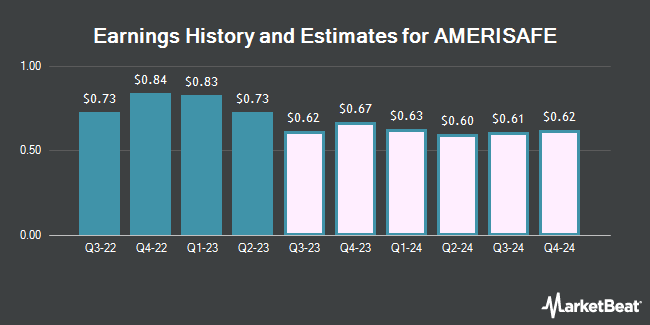 Complete the form below to receive the latest headlines and analysts' recommendations for Amerisafe with our free daily email newsletter: