Mercadolibre (NASDAQ:MELI) had its price objective raised by Credit Suisse Group from $770.00 to $1,255.00 in a research note published on Thursday morning, The Fly reports. The firm currently has an outperform rating on the stock.

Mercadolibre (NASDAQ:MELI) last announced its quarterly earnings data on Tuesday, May 5th. The company reported ($0.44) earnings per share for the quarter, topping the Thomson Reuters’ consensus estimate of ($0.48) by $0.04. The business had revenue of $652.09 million for the quarter, compared to analyst estimates of $609.27 million. Mercadolibre had a negative net margin of 8.28% and a negative return on equity of 5.29%. The company’s revenue was up 37.6% on a year-over-year basis. During the same period in the prior year, the firm posted $0.13 EPS. Analysts expect that Mercadolibre will post -0.95 earnings per share for the current year.

MercadoLibre, Inc operates online commerce platforms in Latin America. It operates MercadoLibre Marketplace, an automated online commerce platform that enables businesses and individuals to list merchandise and conduct sales and purchases online; and MercadoPago FinTech, a financial technology solution platform, which facilitates transactions on and off its marketplaces by providing a mechanism that allows its users to send and receive payments online, and allows merchants to process transactions via their Websites and mobile apps, as well as in their brick-and-mortar stores through QR and mobile points of sale.

Recommended Story: What is FinTech? 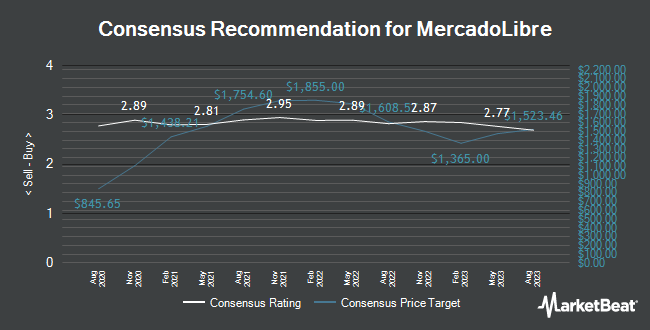 Complete the form below to receive the latest headlines and analysts' recommendations for Mercadolibre with our free daily email newsletter: