Raymond James (NYSE:RJF) had its price target lifted by stock analysts at Credit Suisse Group from $74.00 to $77.00 in a research report issued on Friday, BenzingaRatingsTable reports. The brokerage presently has a “neutral” rating on the financial services provider’s stock. Credit Suisse Group’s price objective suggests a potential upside of 10.82% from the stock’s current price.

Raymond James Financial, Inc, a financial holding company, through its subsidiaries, engages in the underwriting, distribution, trading, and brokerage of equity and debt securities, and the sale of mutual funds and other investment products in the United States, Canada, Europe, and internationally. The company operates through Private Client Group, Capital Markets, Asset Management, RJ Bank, and Other segments. 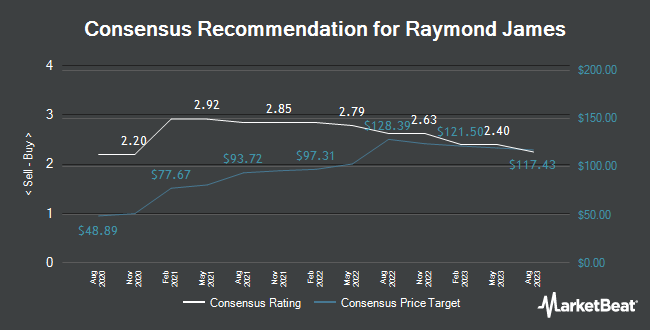 Complete the form below to receive the latest headlines and analysts' recommendations for Raymond James with our free daily email newsletter: