Freshpet, Inc. (NASDAQ:FRPT) EVP Stephen Macchiaverna sold 1,000 shares of Freshpet stock in a transaction on Tuesday, June 8th. The shares were sold at an average price of $177.00, for a total transaction of $177,000.00. Following the completion of the sale, the executive vice president now owns 82,497 shares in the company, valued at approximately $14,601,969. The transaction was disclosed in a legal filing with the Securities & Exchange Commission, which can be accessed through this link.

Freshpet (NASDAQ:FRPT) last issued its earnings results on Sunday, May 2nd. The company reported ($0.26) earnings per share for the quarter, missing the Zacks’ consensus estimate of ($0.02) by ($0.24). Freshpet had a negative return on equity of 2.21% and a negative net margin of 3.07%. The business had revenue of $93.41 million during the quarter, compared to analysts’ expectations of $94.89 million. During the same period last year, the firm posted ($0.10) EPS. Freshpet’s quarterly revenue was up 33.3% compared to the same quarter last year. Research analysts predict that Freshpet, Inc. will post 0.06 EPS for the current fiscal year.

Freshpet, Inc manufactures and markets natural fresh meals and treats for dogs and cats in the United States, Canada, and the United Kingdom. The company sells its products under the Freshpet brand; and Dognation and Dog Joy labels through various classes of retail, including grocery, mass, club, pet specialty, and natural, as well as online. 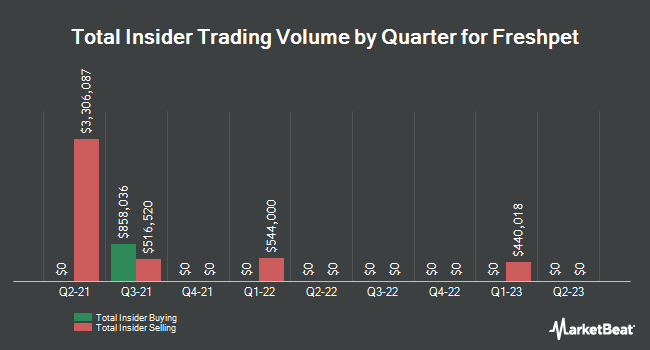 Receive News & Ratings for Freshpet Daily - Enter your email address below to receive a concise daily summary of the latest news and analysts' ratings for Freshpet and related companies with MarketBeat.com's FREE daily email newsletter.

The Honest Downgraded to “Neutral” at Guggenheim

Complete the form below to receive the latest headlines and analysts' recommendations for Freshpet with our free daily email newsletter: