Equities analysts expect Allegiant Travel (NASDAQ:ALGT) to report $469.00 million in sales for the current quarter, Zacks Investment Research reports. Three analysts have made estimates for Allegiant Travel’s earnings, with the lowest sales estimate coming in at $464.70 million and the highest estimate coming in at $472.00 million. Allegiant Travel reported sales of $246.56 million in the same quarter last year, which would indicate a positive year-over-year growth rate of 90.2%. The firm is scheduled to announce its next quarterly earnings results on Wednesday, February 2nd.

On average, analysts expect that Allegiant Travel will report full year sales of $1.68 billion for the current financial year, with estimates ranging from $1.68 billion to $1.69 billion. For the next year, analysts expect that the business will report sales of $2.20 billion, with estimates ranging from $2.14 billion to $2.23 billion. Zacks’ sales calculations are a mean average based on a survey of research analysts that cover Allegiant Travel.

Allegiant Travel (NASDAQ:ALGT) last issued its quarterly earnings results on Tuesday, October 26th. The transportation company reported $0.66 EPS for the quarter, topping the Zacks’ consensus estimate of $0.64 by $0.02. The business had revenue of $459.47 million for the quarter, compared to analyst estimates of $451.35 million. Allegiant Travel had a negative return on equity of 0.35% and a net margin of 7.71%. Allegiant Travel’s quarterly revenue was up 128.6% compared to the same quarter last year. During the same period last year, the company posted ($4.28) earnings per share.

In other Allegiant Travel news, insider Rebecca Aretos sold 182 shares of Allegiant Travel stock in a transaction dated Tuesday, October 26th. The stock was sold at an average price of $182.45, for a total transaction of $33,205.90. The transaction was disclosed in a document filed with the Securities & Exchange Commission, which is available at this hyperlink. 16.70% of the stock is owned by company insiders.

See Also: What is the QQQ ETF? 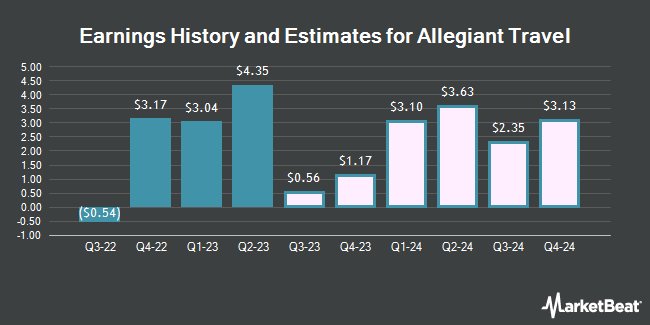 Complete the form below to receive the latest headlines and analysts' recommendations for Allegiant Travel with our free daily email newsletter: