Millennium Management LLC increased its position in shares of Chimerix, Inc. (NASDAQ:CMRX) by 466.1% during the 2nd quarter, according to its most recent filing with the Securities and Exchange Commission (SEC). The fund owned 574,227 shares of the biopharmaceutical company’s stock after acquiring an additional 472,789 shares during the quarter. Millennium Management LLC owned about 0.67% of Chimerix worth $4,594,000 as of its most recent SEC filing.

In other Chimerix news, insider David Jakeman sold 4,590 shares of Chimerix stock in a transaction on Thursday, September 30th. The shares were sold at an average price of $6.19, for a total transaction of $28,412.10. The transaction was disclosed in a legal filing with the Securities & Exchange Commission, which can be accessed through the SEC website. Insiders own 6.90% of the company’s stock.

Chimerix (NASDAQ:CMRX) last released its quarterly earnings data on Thursday, November 4th. The biopharmaceutical company reported ($0.21) EPS for the quarter, hitting the Zacks’ consensus estimate of ($0.21). Chimerix had a negative net margin of 4,762.96% and a negative return on equity of 58.06%. During the same quarter in the previous year, the business earned ($0.18) earnings per share. On average, analysts predict that Chimerix, Inc. will post -0.97 earnings per share for the current year.

Chimerix, Inc is a biopharmaceutical company, which engages in the research, development, and commercialization of pharmaceutical products. Its portfolio includes Brincidofovir for the treatment of adenovirus, cytomegalovirus, and smallpox. The company was founded by George R. Painter, III and Timothy Wollaeger in April 2000 and is headquartered in Durham, NC.

Further Reading: What is a stock buyback? 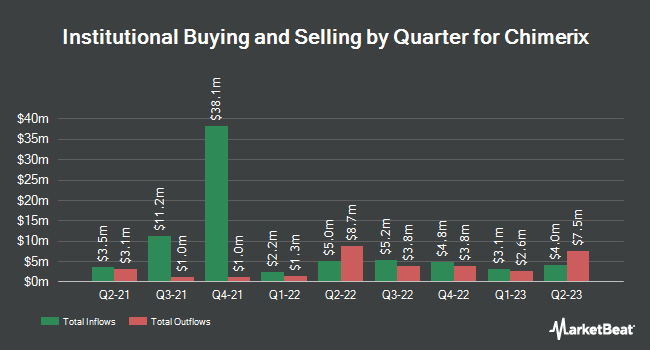 Receive News & Ratings for Chimerix Daily - Enter your email address below to receive a concise daily summary of the latest news and analysts' ratings for Chimerix and related companies with MarketBeat.com's FREE daily email newsletter.

Playgroundz Price Down 12.8% Over Last Week

Stakinglab Trading Up 84.6% Over Last 7 Days

Volkswagen AG Given Consensus Recommendation of “Hold” by Brokerages

Complete the form below to receive the latest headlines and analysts' recommendations for Chimerix with our free daily email newsletter: