SG Americas Securities LLC bought a new position in Syndax Pharmaceuticals, Inc. (NASDAQ:SNDX) during the 3rd quarter, according to its most recent Form 13F filing with the Securities and Exchange Commission (SEC). The firm bought 28,250 shares of the company’s stock, valued at approximately $540,000.

SNDX has been the subject of several recent research reports. Morgan Stanley increased their price target on Syndax Pharmaceuticals from $20.00 to $21.00 and gave the company an “equal weight” rating in a report on Tuesday, October 12th. Zacks Investment Research downgraded Syndax Pharmaceuticals from a “hold” rating to a “sell” rating in a report on Wednesday. One research analyst has rated the stock with a sell rating, one has issued a hold rating and four have given a buy rating to the company’s stock. According to MarketBeat, Syndax Pharmaceuticals currently has an average rating of “Buy” and an average price target of $25.00.

Syndax Pharmaceuticals, Inc is a clinical-stage biopharmaceutical company, which engages in the development of cancer therapies. Its product candidates include SNDX-5613 and SNDX-6352. The company was founded by Richard A. Heyman, Eckard Weber, Peter Ordentlich, Ronald M. Evans and Michael Downes on October 11, 2005 and is headquartered in Waltham, MA.

Want to see what other hedge funds are holding SNDX? Visit HoldingsChannel.com to get the latest 13F filings and insider trades for Syndax Pharmaceuticals, Inc. (NASDAQ:SNDX). 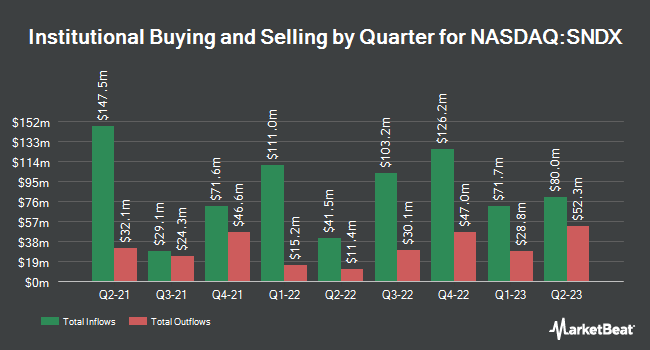 Scry.info Price Up 0.4% Over Last Week

NFTb Trading Down 6.9% Over Last Week

Complete the form below to receive the latest headlines and analysts' recommendations for Syndax Pharmaceuticals with our free daily email newsletter: