Verint Systems Inc. (NASDAQ:VRNT) insider Peter Fante sold 4,331 shares of Verint Systems stock in a transaction that occurred on Tuesday, January 11th. The shares were sold at an average price of $52.93, for a total transaction of $229,239.83. The transaction was disclosed in a document filed with the Securities & Exchange Commission, which is available at this hyperlink.

Verint Systems (NASDAQ:VRNT) last released its quarterly earnings data on Thursday, December 2nd. The technology company reported $0.69 EPS for the quarter, beating the Thomson Reuters’ consensus estimate of $0.53 by $0.16. Verint Systems had a negative net margin of 0.09% and a positive return on equity of 13.75%. The firm had revenue of $224.82 million for the quarter, compared to the consensus estimate of $218.22 million. During the same period in the previous year, the company earned $0.72 earnings per share. The company’s quarterly revenue was up 4.5% on a year-over-year basis. As a group, research analysts forecast that Verint Systems Inc. will post 1.48 earnings per share for the current year.

A number of analysts have recently issued reports on the stock. Needham & Company LLC reiterated a “buy” rating and issued a $61.00 price objective on shares of Verint Systems in a report on Friday, December 3rd. Royal Bank of Canada boosted their target price on shares of Verint Systems from $55.00 to $57.00 and gave the stock an “outperform” rating in a report on Friday, December 3rd. One research analyst has rated the stock with a hold rating and five have given a buy rating to the company’s stock. According to MarketBeat.com, Verint Systems has a consensus rating of “Buy” and an average target price of $63.57.

Featured Article: How to build a Fibonacci channel 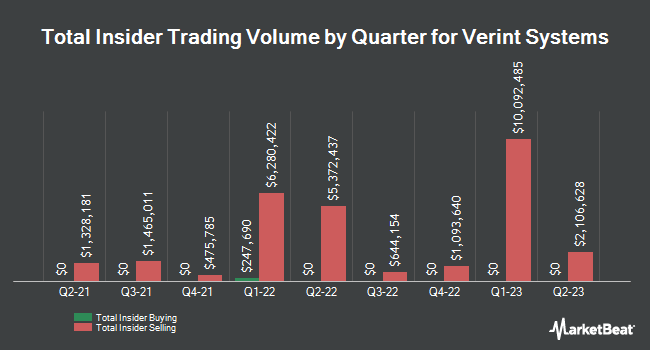 Sentinel Chain Trading Down 9.4% This Week

KIMCHI.finance Price Down 9.1% Over Last 7 Days

Complete the form below to receive the latest headlines and analysts' recommendations for Verint Systems with our free daily email newsletter: