Meyer Handelman Co. trimmed its holdings in shares of Hewlett Packard Enterprise (NYSE:HPE – Get Rating) by 2.5% in the 2nd quarter, according to the company in its most recent 13F filing with the Securities and Exchange Commission (SEC). The firm owned 256,494 shares of the technology company’s stock after selling 6,620 shares during the quarter. Meyer Handelman Co.’s holdings in Hewlett Packard Enterprise were worth $3,401,000 as of its most recent SEC filing.

In other news, CEO Irv Rothman sold 70,115 shares of the stock in a transaction dated Friday, September 9th. The stock was sold at an average price of $13.33, for a total value of $934,632.95. The transaction was disclosed in a filing with the SEC, which is accessible through this hyperlink. 0.45% of the stock is owned by corporate insiders.

The business also recently declared a quarterly dividend, which will be paid on Friday, October 7th. Shareholders of record on Monday, September 12th will be given a $0.12 dividend. This represents a $0.48 dividend on an annualized basis and a yield of 4.00%. The ex-dividend date of this dividend is Friday, September 9th. Hewlett Packard Enterprise’s dividend payout ratio is currently 17.14%. 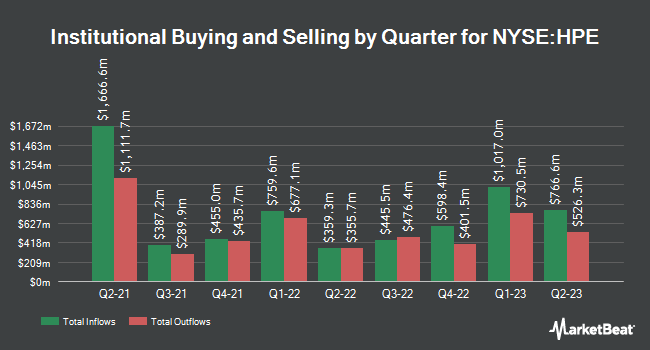 Complete the form below to receive the latest headlines and analysts' recommendations for Hewlett Packard Enterprise with our free daily email newsletter: